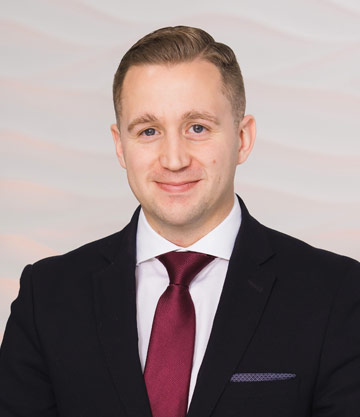 DQ has announced the additions of Mark Emery and Alexander Armstrong to its leading Dispute Resolution department. Mark has joined the firm as an Associate Director, with Alexander appointed an Associate.

Since qualifying as a Manx advocate in 2012, Mark has regularly appeared at all levels of the Isle of Man High Court of Justice and practices a wide range of commercial litigation. He has experience in commercial disputes, corporate insolvency, banking litigation, applications for injunctive relief, enforcing foreign judgments and advising on contentious issues of employment, data protection and trust law.

Mark has also been regularly ranked by the Legal 500 and Chambers & Partners, and is a member of the IFG (previously known as the Fraud Network), a handpicked group of specialist fraud lawyers across the world which focuses on securing injunctions, asset recovery and trust busting remedies in key offshore jurisdictions.

Notably Mark has recently completed a long-distance master’s degree in Corporate and Insolvency Law with Nottingham Law School, earning not only a distinction but also being awarded a prize for the best overall performance in the Law School.

Alexander joins DQ from another local firm following qualification as a Manx Advocate in 2017. Presently chairman of the Isle of Man Young Lawyers’ Association, he has a diverse practice and

experience in a broad range of commercial litigation with a particular interest in debt recovery, personal injury, insolvency law and fraud and asset tracing.

Alexander has also previously been awarded the Isle of Man Law Society’s George Johnson Law Prize, winning the honour with an essay entitled “Will advocates and judges be replaced by computer-based services in the future?”

Leanne McKeown, Head of DQ’s Dispute Resolution Department, commented on the additions stating: ‘Mark and Alexander represent excellent hires. Each of them bring considerable skill and technical knowledge to DQ, strengthening further the firm’s dispute resolution offering. DQ continues to build upon its strong workplace culture, fostering opportunities for learning and professional development. Our dedication in this regard, coupled with our reputation in the marketplace as a leading firm of advocates, has allowed us to recruit ambitious, high calibre advocates to the team, meaning we are even better placed to advise our clients on a full suite of litigation matters.’

Speaking about his appointment, Mark said: ‘I am delighted to be joining the team. DQ has a first-rate reputation on the Isle of Man and I am hopeful I can play a part in growing the firm and adding to its first-class delivery of services to clients.” Alexander added: “I am looking forward to a fantastic future at DQ and hope to play an important part in adding to DQ’s culture of respect, excellence and integrity.’

Previous Post Trusts in 2 Minutes: Pause – check that clause!
Next Post Wills & Estates: Points to Ponder – Part 1 Why Make a Will?