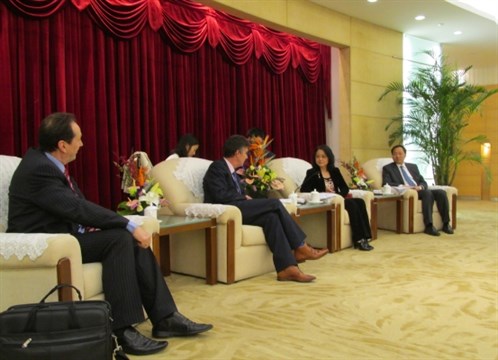 Minister for the Department of Economic Development Laurence Skelly MHK led an Isle of Man business delegation in Shanghai to foster cooperation on economic, trade and investment matters between the two regions.

On Friday 8 April, the Minister and the Chairman of the Shanghai Commission, Ms Yuying Shang met to sign the agreement. The Minister commented:

‘This is an important step forward in solidifying our relationship with China and its regions. Shanghai is the leading financial centre in China and its Free Trade Zone is integral in China’s endeavour to liberalise conditions for trade with the rest of the world.

‘Signing the MOU has been one of the benefits of a successful week promoting the Isle of Man in China to business and political leaders. The MOU gives us the opportunity to work together for the long term to benefit both regions and provide wider commercial opportunities to engage with the Shanghai region.’

Under the terms of the MOU, the authorities in Shanghai will promote the Isle of Man as a base for companies seeking to expand into UK and EU markets as well as assist any Isle of Man companies looking to establish themselves in Shanghai or its Free Trade Zone.

In return, the Isle of Man Government will assist companies from Shanghai wishing to locate to the Island, promote the city as a potential destination for Manx businesses seeking a base in China and facilitate introductions to the Isle of Man’s experienced professional services companies.