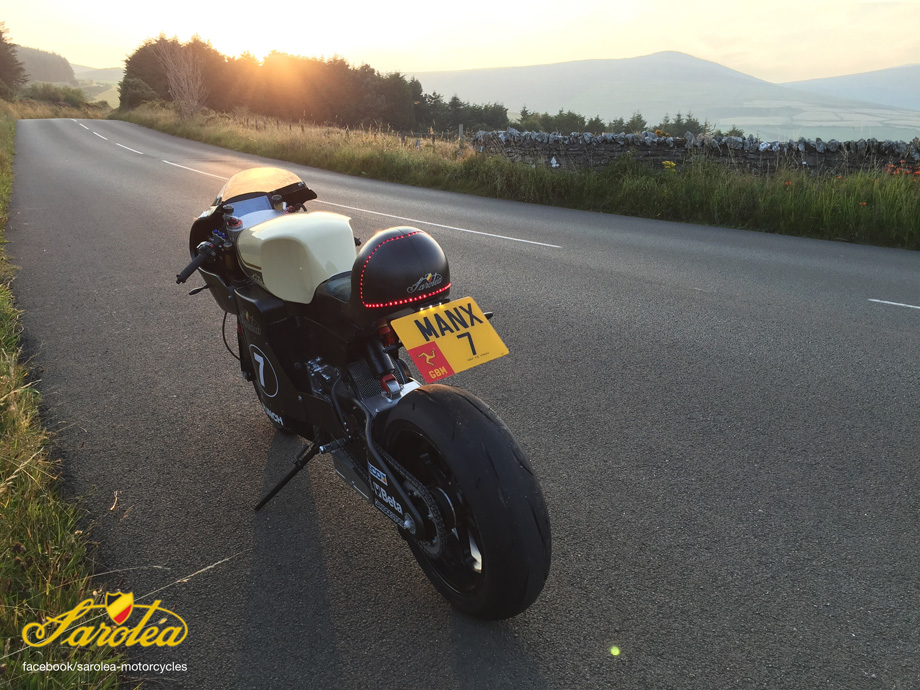 Following the success of the bike at the Isle of Man TT in 2015, where Saroléa became the first European constructor in history to break the magic “ton” in the TT Zero race, DQ and Saroléa recently announced that the team will have two riders racing the 2016 SP7 in the TT Zero:  Leading riders Lee Johnston and Dean Harrison are confirmed to ride for the iconic Belgium brand.

In September 2015, Torsten and twin brother Bjorn Robbens arrived on the Isle of Man with the Saroléa SP7 race bike with the aim of creating a street legal version of the bike, derived directly from the SP7. DQ’s Paul Blake and Tom Maher worked closely with Torsten and Bjorn throughout their time on the island assisting with this exciting project. The team worked on final adjustments to the racing bike to satisfy the Isle of Man’s road legal tests and the result was the birth of Saroléa’s über cool “Manx 7” electric superbike. Saroléa is looking to gear up for the production in 2016/2017 of a limited number of Manx 7 electric superbikes and expressions of interest have already been taken from a number of prospective clients.

DQ and Saroléa are very grateful to the Isle of Man Government’s Adrian Moore (Department of Economic Development) and Nicola Hodson (Department of Transport) for all their assistance with this project. The Isle of Man is truly living up to its tag line “Where You Can”.

Team Saroléa brings back to life the name and pedigree of Belgium’s first domestic motorcycle manufacturer and one of the first producers of motorcycles in the world. 2014 was the first time in over 50 years that the famous Saroléa name was seen in competition. The original Saroléa factory was first opened in Belgium in 1850 as a weapons manufacturer, before founder Joseph Saroléa entered the world of bicycle design in 1892. The company later diversified into the production of motorcycles and components, and in its heyday Saroléa  was producing up to 75 machines per day, before finally shutting down in 1963.

The Saroléa name disappeared until 2010 when racing team manager and entrepreneur Torsten Robbens purchased the rights to Saroléa and drew upon his considerable racing pedigree to resurrect the brand. The youngest Team Manager ever to win the Le Mans 24 Hours, with 10 years’ experience in Formula 1, Torsten’s long list of achievements renders him as one of the most celebrated figures in the world of motorsport, and includes such honourable mentions as Team Manager for Audi Sport Japan team Goh, winner of the Spa 1000km and the Le Mans 1000km, and lead designer of the Saroléa SP7.

At the Isle of Man TT in 2015, Saroléa became the first European constructor in history to break the magic “ton” in the TT Zero race with a lap of 106.510mph.

DQ is a leading Isle of Man based law firm with an international reach.

We offer a full range of legal, regulatory and compliance services to our local and global clients. We are accessible, responsive and commercial with client oriented strategies and goals.  Our specialist lawyers are recommended as leading lawyers in Chambers and Legal 500.