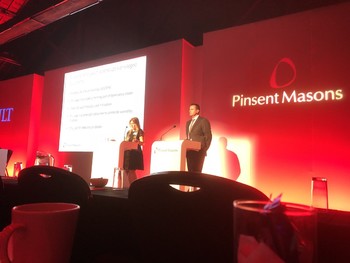 Our director of Dispute Resolution, Giles Hill, was, for the third year running, among delegates at Europe’s largest Restructuring and Insolvency Conference.

Organised by international law firm Pinsent Masons (with whom we have a strong relationship), the event at the Brewery conference centre in the City of London was attended by more than 450 restructuring professionals.  It featured a range of speakers on topics relevant to insolvency practitioners and their staff.

Giles joined bankers, fund managers, surveyors, government bodies and turnaround professionals from over 150 organisations for a comprehensive programme of thought-provoking presentations and debate. These included a focus on privilege and restructuring professionals, economic, legal and personal insolvency updates, cyber security risks and a ‘live’ case study played by actors on banter in the workplace.  There was also a topical panel discussion on the demise of construction group Carillion which collapsed earlier this year and has since led to a spike in the number of UK building firms becoming insolvent.

Speaking about the conference, Giles said: ‘Not only was it an informative schedule packed once again with a variety of sessions, it also allowed more than sufficient time for networking.

‘It is of considerable benefit to be able to operate from the Isle of Man and have a global reach with a wealth of expertise which allows us to help our clients wherever the growth or demise of their business takes place.  To be able to share DQ’s considerable experience in restructuring and insolvency with those who have their own experiences in the issues most important to the profession is invaluable.’