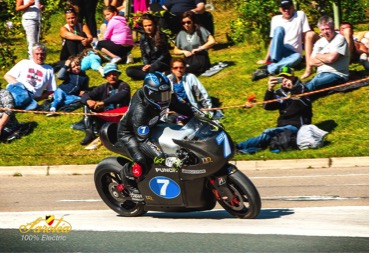 A second bike, world class riders for TT 2016 and the birth of “Manx 7” a street legal electric superbike

Leading offshore law firm DQ Advocates continues its electric partnership with Belgian superbike brand Saroléa as the team evolves through innovation, creativity and hard work. The visionary behind the brand, Torsten Robbens, has taken all his experience from F1, Le Mans 24 hour and the aerospace industry to bring Saroléa, the oldest Belgian motorcycle brand, back to life.

Following the success of the bike at the Isle of Man TT in 2015, where Saroléa (with rider Robert Wilson) became the first European constructor in history to break the magic “ton” in the TT Zero race, this formidable team has been working non-stop, building towards TT 2016 and the evolution of their electric superbike brand.

The birth of the street legal electric superbike “Manx 7”

In September 2015, Torsten and twin brother Bjorn Robbens arrived on the Isle of Man with the Saroléa SP7 race bike with the aim of creating a street legal version of the bike, derived directly from the SP7. DQ’s Paul Blake and Tom Maher worked closely with Torsten and Bjorn throughout their time on the island assisting with this exciting project. The team worked on final adjustments to the racing bike to satisfy the Isle of Man’s road legal tests and the result was the birth of Saroléa’s uber cool “Manx 7” electric superbike. On 9 September 2015, a dream came true for Torsten, when he took his first ever ride on the bike that he designed and created, along the TT course in the beautiful autumnal Manx sunshine.

DQ and Saroléa are very grateful to the Isle of Man Government’s Adrian Moore (Department of Economic Development) and Nicola Hodson (Department of Transport) for all their assistance with this project. The Isle of Man is truly living up to its tag line “Where You Can”.

The creation of a street legal bike has acted as a launch pad for a variety of exciting new initiatives for the Saroléa brand. After returning from the Isle of Man, the team embarked on a road trip from Belgium to Italy to visit Bridgestone’s European proving ground. Alongside DQ, Bridgestone, the world’s largest tyre manufacturer, provides key sponsorship and technical assistance to Saroléa.

The experts at Bridgestone provided invaluable input to enable the team to make improvements and adjustments to get the best out of this wonderful machine.

Saroléa is also gearing up for the production in 2016/2017 of a limited number of Manx 7 electric superbikes. Expressions of interest have already been taken from a number of prospective clients (with a bike this cool, you are a client not a customer!). Just look at these photos; Saroléa is clearly going to be the coolest bike manufacturer in the world. David Beckham, don’t delay if you want a chance to join what will be an ultra-exclusive owners club.

As part of this pre-production campaign, Saroléa formally unveiled its Manx 7 electric superbike to the world at the EICMA International Motorcycle Show in Milan in November 2015. EICMA is the world’s largest bike show with over 600,000 visitors so this was the perfect place to launch Saroléa’s “Manx 7”. Bridgestone very kindly hosted team Saroléa and Manx 7 at its high profile stand at EICMA.

Even before the show opened to the public, the great and the good of the motorcycle industry were showing real interest in Manx 7. Saroléa was delighted to welcome racing legend Steve Parrish to the stand to sneak an early look at their latest creation.

As preparations for TT 2016 continue, DQ and Saroléa recently announced that the team will have two riders racing the 2016 SP7 in the TT Zero.

Leading riders Lee Johnston and Dean Harrison are confirmed to ride for the iconic Belgium brand. Lee, who raced the TT Zero for the first time in 2015 with an American team and finished on the podium, said “I’m buzzing to be on board with Saroléa…this year the plan is to podium again, but faster!” Dean commented “It’s my first time racing the TT Zero and I cannot wait. I’ve been following the team since they raced for the first time in 2014 and I’m itching to get on the bike. The technology is off the scale and this year is going to be flat out”.

With huge interest from the crowd of teams, journalists and fans, Bjorn, Lee and Dean took to the stage and were interviewed by Steve Parrish and James Whitham at the TT 2016 launch event a few weeks ago. Both Lee and Dean were obviously excited to be racing in the same team and were about to fly to Belgium to meet up with Torsten and get out on the test track with the bikes. Bjorn clarified that the bikes were not identical, but that each rider would be getting his own bike each finished in different colours.

The full interview can be seen here (with Bjorn, Lee and Dean arriving on stage at 41:50).

Steve Parrish was clearly interested in the road legal bike as he was keen to question Bjorn about it during the TT launch. Bjorn was able to confirm that the team was looking to start production at the end of 2016. There was a huge round of applause from the crowd as Bjorn also announced that it was “very likely” that production of the road bike could happen here on the Isle of Man.

We at DQ continue to be passionate about our partnership with Saroléa and are truly excited to be on board as this unique journey continues into 2016. We wish Torsten, Bjorn and all the extended team the very best of luck as they take Saroléa to the next level.

To read the great story behind how DQ and Team Sarolea got together in the first place, click here